After personal assistant Kiersten Abbott wins sixty-nine million dollars in the lotto, she suddenly has more than enough money to quit her impossibly demanding job.  But where’s the fun in that? She decides to stay and exact a little revenge on her insufferable ass of a boss.

Billionaire Cole Harrington quickly figures out something’s afoot with his usually agreeable personal assistant. When he finds out about the office pool betting on how long it’ll take him to fire her, he decides to spice things up and see how far he can push her until she quits.

The game is on, with everyone waiting to see who will crack first. But the bet sparks a new dynamic between them, and soon they realize they just might have crossed that fine line between hate and love.

OK, so that’s the official blurb. What did I think about it?

I loved it. I loved, loved, loved this book. It was laugh-out-loud funny; it was exactly the right mix of fantasy (come on, who actually wins the lotto?) and wish fulfillment and revenge and romance. Kiersten (Kestin, Krispin, etc…) puts up with SO much shit from Cole, at first because he’s got his head so far up his ass he can’t find it with both hands and a floodlight, and then because he just wants to break her composure. When she turns her hand to getting him back – it’s priceless. This is the book I want to buy for all my girlfriends. This is the book I wish I’d had to read when I was 25 and working in a soulless long-term temp job as a sales assistant for a fat, arrogant insurance company president. I cannot wait to read the rest of this series, but I don’t know how they can ever live up to this lovely little book vacation.

Let’s celebrate this book’s Release Day with a giveaway of a Kate Spade purse. Not quite a winning lotto ticket, but winning is winning… right? 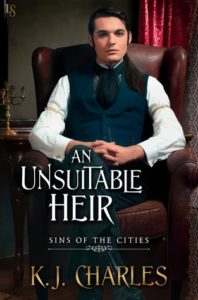 Grace Burrowes’ books are what I turn to when I’m feeling a little ragged. To me, they’re the equivalent of a nice, civilized cup of tea; particularly after I’ve been drinking too much coffee (or whiskey). Her writing is woven together as precisely as a lace-knit shawl, and the basic decency of her characters is generally a balm to my nerves.

This book covered all those bases for me, but it also managed to be a little sharper, a little livelier than some of her recent books (I’m looking at you, True Gentlemen). In this story, we got Burrowes’ usual likeable, intelligent main characters who used their words, had nice adult reactions to their physical attraction, and dealt with their interpersonal issues in mostly un-frustrating ways. But we also got a compelling side plot complete with fairly three-dimensional antagonists, not-too-cute kids, and a little bit of action.

The only thing keeping it from being a true five-star read is that Colin and Anwen fell for each other SO quickly, SO easily… it was just so convenient. On the other hand, the lack of angst between them is part of what I enjoyed!

Overall, I found this to be one of Grace Burrowes’ most balanced and enjoyable reads, and look forward to revisiting it in a year when I need that soothing, settling, slightly adventurous just-right tone.

It’s no secret to readers of my reviews that I love KJ Charles’s writing. In fact, I’m fairly convinced KJ Charles has never written a bad book; that in fact everything she’s written is spectacular. So when I tell you that I’m pretty sure this is her best yet, that should mean something.

An Unnatural Vice has all the grittiness of her Charm of Magpies series and all the class conflict of the Society of Gentlemen series, rolled into one perfect package. We get to revisit characters from An Unseen Attraction while also meeting Justin Lazarus, the Seer of London, a man of infinite talents and insecurities. The plot thread begun in An Unseen Attraction about the Earl of Moreton’s bigamy and its consequences continues here, with more violence and mystery as the heroes and secondary characters frantically seek the missing heir.

The ending is a delight, and I find myself desperately hoping that the next book (as indicated by the “to be continued…”) will be about Mark Braglewicz and the young man he’s in such a twist about as this story ends (no spoilers here).

It’s hard for me to believe that these books flew under my radar for so long. I see that I had checked The Black Hawk out of the library, even, but not read it (which is good, because really, of all the books in the series, that one is the one that benefits most from the build-up! Definitely not a standalone candidate).

I guess that we read the books we’re meant to read, at the time we’re meant to read them. And for me, that time was now. I started on this series this spring, and binge-read my way through all five of the currently available books. I was late getting back from lunch, at work, because I was busy reading. I stayed up way past bedtime more than once. Now I’m sad because the sixth (and probably final) book, Severine’s book, Beauty Like the Night, isn’t out until August. For now, have some capsule reviews of the rest!

I read them in chronological/event timeline order rather than publication order, because my brain works that way.

The Forbidden Rose: Doyle’s story! I love me some Doyle, and not just because he reminds me of my husband (cleans up nicely but is a working man). Doyle and Maggie are utterly charming together, and Marguerite is pretty incredible on her own too. This is our introduction to Adrian and Justine, and really the setup for the rest of the series. The scenes of the chaos in Paris were gripping, heartbreaking, but none so much as Justine leaving her sister in the care of Doyle and Maggie. 4 stars at time of reading and 5 stars on further reflection.

The Spymaster’s Lady: I put this on my “multiple rereads, it’s that awesome” shelf in Goodreads. That’s the first thing you should know. The second is that the heroine has a secret that even we don’t know, at first, and when you realize it, you’ll be as flabbergasted as I was that she managed the things she did. It starts with a daring escape and the adventure continues at a breakneck pace from there. Annique and Grey are delightful together, both a little bit curmudgeonly and with reason, and the secondary characters, particularly Doyle, are fantastic. Let’s not forget — no, we’d never forget — Adrian. *swoon* — 4 stars

Rogue Spy: The action in this happens somewhat in parallel with The Spymaster’s Lady. Pax’s story is pretty heart-wrenching, and watching him find some measure of happiness by the end of the book was great. He and Camille have a shared history as child spies of the French Secret Police, and their relationship is as tangled as can be. That they come to any sort of denouement is amazing. I shelved this one as ‘multiple rereads’ but also as ‘dark’ and ‘damaged hero/heroine’. 5 stars.

My Lord and Spymaster: Oh, another ships-and-kidnappings story. Except it did turn out to have plenty of surprises! I think my favorite thing about Bourne’s writing is that her H and h generally start off as enemies, or at least at odds/on opposite sides, and watching them work around to love is pretty neat. Especially when there are a lot of complications, as there were in this story. I found some of this particular novel a little unbelievable – that Jess could have ‘belonged’ to the crime lord and then simply gone on to have a whole other life – but it worked fine for the plot. As always, our favorite secondary characters are here, waiting their turns for their stories. — 4 stars

The Black Hawk: The book everyone was waiting for – Adrian Hawkhurst and Justine de Cabrillac. So, is it just me or did anyone else miss some bits, like when and where Adrian changed his name and became a Sir? Anyhow, in this story, we find him mature and rather terrifyingly in charge of the British Intelligence Service. Justine drops back into his life when someone attempts to kill her nearly on his doorstep. We learn, through many flashbacks, of their complicated history. I think one of my favorite things about this book is that both of them are older – mid-thirties or more, if my math is right – and there’s no expectation that they will have an epilogue with babies and idyllic country house parties. There’s a lot of accumulated damage and a lot of work on both sides to reach a happy ending. But they do, oh, they do. 5 I’m-not-crying-you’re-crying stars.